Heading off this weekend to headline the music festival at Le Brevedent (near Lisieux) in Normandy.  We played a gig in the chateau there last year but couldn’t take up the invitation to return for the September Festival due to gigging commitments.  This year, however, we’re right there!  France, Gecko 3 and Calvados – what could possibly go wrong?  Really looking forward to a great weekend.

It’s that time of year again and we’ve got a couple of stunning gigs during the Edinburgh Fringe this year.
First up on Tuesday 4th we’re proud to be headlining the opening night of the prestigious Acoustic Edinburgh Festival. This will be an acoustic set and joining us on er, electric piano, will be Jean-Baptiste Richon.
This is undoubtedly the best value music night on the Fringe – 3 hours of stunning acoustic music in a lovely intimate atmosphere for only £5!

Also for you late birds we return to The Jazz Bar for some late night grooves 3am until 5am on Friday night (Aug 7th).

Hope to see you at one or both of these!

P.S. The keen-eyed among you will have spotted that our very own Hugh Martin is the face of the Acoustic Edinburgh Festival flyers this year!

It’s the weekend so grab your tent and sunglasses and head to Kelburn Castle (home of the Graffiti Project) for Scotland’s newest and best value music festival!

We’re on the Village Stage at 8.15pm on Saturday night so get there good and early. Tickets available at the gates!

We’ve just had our appearance at this year’s Knockengorroch World Ceilidh confirmed for the Saturday (May 23rd) so clearly we’re pretty excited about that.  You can get more details and buy tickets from www.knockengorroch.org.uk   When we know our stage time we’ll pass it on here. 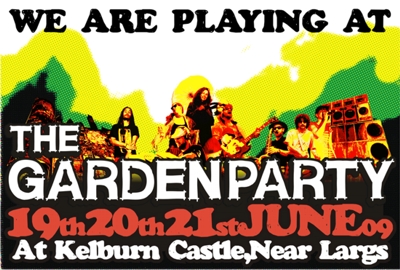 Just a quick update: as predicited, the official website is now functioning:

It’s the only place you can get yourself one of the limited number of early bird tickets.  It has a great line up, and the icing on the castle-shaped cake is that we will be playing at 3.30pm on Saturday afternoon, just ahead of James Yorkston and the Athletes.

Lazy June afternoon and a little groove to go with your beer…?

Ah, the summer, even the thought makes you forget the months of darkness and cold and wind and misery and… okay, maybe not forget, but certainly set to one side for a moment.  We’re excited to announce that we’re playing the Kelburn Garden Party this June (19th-21st).  This is a new festival but we’ve played over there on many occasions in the past and always had a blast.  Last year’s festival had to be cancelled due to a last minute policing demand but this year looks set to go ahead.  The Kelburn Garden Party  has a fantastic line up and with such a brilliant venue looks set to be a great weekend.  No doubt the formal website will be up and running soon, but in the meantime, you can secure early bird tickets at: http://www.efestivals.co.uk/festivals/kelburngardenparty/2009/

We are also really hopeful of sorting out a spot at the Knockengorroch World Ceilidh www.knockengorroch.org.uk but we’re a little tight for time that weekend (May 22-25)due to other commitments so we’ll keep you posted.

In other news the Moose is nearly home after his jaunt round Australia so we hope to get cracking on that elusive album for the summer.  We are also currently organising a tour in Northern France for mid September, but more on that when we have confirmations.

Happy New Year! Thanks to everyone who brought in the New Year with us at the Departure Lounge – it was a great night. I particularly enjoyed the hundreds of people bawling out the words and jumping around manically to the ska choruses at the end of Auld Lang Syne. It was a great way to start off the year of Rabbie Burn’s 250th birthday. It’s almost as if everyone had been drinking heavily…
Just when you thought it was safe to go back to the water – or indeed that you had resolved that would be all you would drink for ever – can we urge you to delay that particular resolution by another day? We are playing on Saturday (3rd Jan) at the tremendous Saturday Night Fish Fry. We’ll be going on at 1am (technically, that’s Sunday, I know) and playing for an hour and 15 as usual. This is a great chance to delay the onset of January blues. Dig out your best dancing face and resolve to make 2009 the year of the party!

Another year comes to a close and what better way to celebrate the New Year than partying with Gecko 3?
We’re kicking off the 1st second of 2009 with a set at Edinburgh’s coolest club Departure Lounge.

This will be an incredible line-up – click the flyer for more details.
We’re on stage at midnight. Also on this amazing bill are:

There may still be tickets if you run!

Have a great Hogmanay whereever you end up!

If you want to milk the last drops of the weekend, join us at The Scottish Hobo Society tonight in The Bongo Club. Doors at 11pm, £3 entry. Regular club night presented by Gamma Ray and DJ Set from Vic Galloway. 2 Bands on stage after midnight! (we’re on second)

I realise that the heading alone is sufficient, really, but as I always say, why use four words when fifty will do?  The concept of this has disturbed me since I was forced to buy some because that was all that the shop had left.  In what parallel realm do the designers of that product exist where wiping your backside on a child’s drawing of a snowman and a pine tree makes you feel more festive?  I mean, quite aside from the fact that our cave-dwelling ancestors knew not to wipe with the branches of a %8&+$! pine tree, seeing the childish doodling on each perforated sheet  has reduced the subsequent action performed to some kind of moral equivalence with stealing the bobble-hat of a four year old out playing in the snow and using the pom-pom instead!  Novelty Christmas Toilet paper!  Sometimes I worry about people…